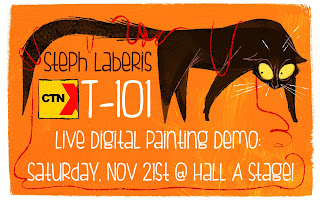 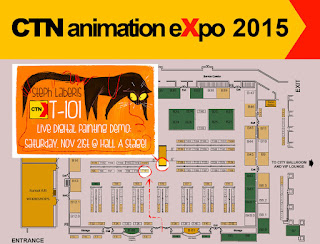 ...and here's the CTN-X post! See you in Burbank in a couple of weeks!

Email ThisBlogThis!Share to TwitterShare to FacebookShare to Pinterest
Finally, I have some big updates for this blog! I am thrilled to announce that 2 titles I am working on this year have gone public, and will be available for purchase mid-2016. 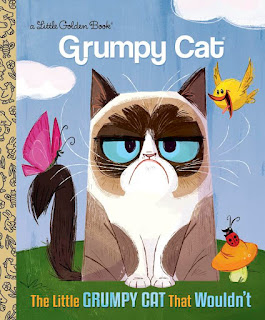 First of all, I am happy to say I will be working on 3 upcoming titles for the new Grumpy Cat Little Golden Book series! Both Grumpy (aka Tardar Sauce) and Little Golden Books need no introduction, but I will take a moment to fan girl over this. I was raised on Golden Books, my favorite being The Poky Little Puppy, and have officially checked an item off of my Bucket List by working on these titles. Tremendous thanks to the crew at Random House and The Bright Agency for making this possible! 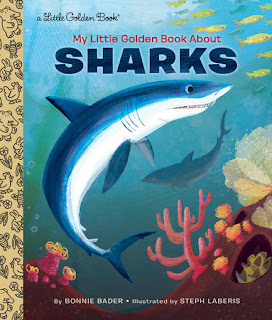 I am also working on 2 unlicensed titles for Little Golden Books, one of which has gone public. SHARKS!! Ironically, I completed the roughs for this book during Shark Week! This is a non-fiction title, which is new territory for me. I won't lie, it's been a little tricky to tone down the expressions on the sharks, since I am so used to drawing whacked-out animals, but I am very happy with progress so far. I also have learned a lot from the manuscript to this book! I also now know what claspers are, haha. At any rate, it's going to be a very busy 2016 for me and I could not be happier for it.

I have even more books in the works, but it's hush-hush for now! That wraps it up for the publishing side of things... as for the animation development part of my life, I will be updating the blog on that shortly. My work on Blazing Samurai is ongoing, and CTN-X is in a couple of weeks! I will have a couple of new prints on sale, and doing a digital painting demo on the center stage in Hall H. But like I said, that's for another post!
Posted by Unknown at 11:24 AM 11 comments: