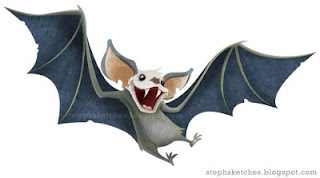 I wish I had heaps of new and exciting sketches to post here, but things have been so crazy lately that I do not :( I do have a nice little batty that is now one of the mascots for that facebook app mentioned way back when. More critters from that will be on the way soon.

In other news, I have a new gig with some pretty awesome peeps! Can't say what it is just yet and although it means I have to work from home once again, I am having a great time doing concepts for this project. Mum's the word! It's pretty ironic though that after 5 years of being pretty active on conceptart.org, I finally, for the first time, hold the official title of concept artist. In almost every other job I had I was called an animator, despite the fact that I haven't animated a thing since college.

Anyhoo, this gig will be most helpful in paying off the damage to my car which happened Saturday night - I'm fine and all, I was just a grade-A dumbass and left the empty stand to my GPS in plain sight in a somewhat sketchy neighborhood in SF. Whatever junkie who made off with my GPS put two and two together, smashed my window and snagged it out of the console I had hidden it in. Lesson learned - get a bigger purse and keep EVERYTHING I CARE ABOUT IN IT! 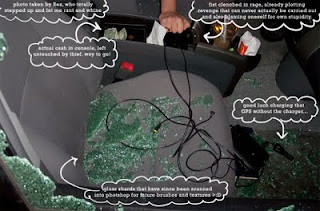 So excited for you with the new job!! EEEPS!
As for the dumb shit who broke into your car.... METH.

Wow, that really sucks ass about your GPS, Steph! :/

Great stuff! Break ins suck, but karma will get them!

Damn, that sucks! Someone did the same with my car.
Damn I hated it!

Well I wish I could only read good news.
By the way, beautiful artwork. I loved your blog.
Have a nice day!!! =D

yay batty is awesome! I love cartoon bats! the real things...well....those too! hurray!

I freaking hate those incosiderate, ass licking thieves that use our stuff to buy their crack or whatever the f they go out and do after breaking into our cars. I did the same thing tho...left the GPS stand out. Who knew that my guy had enough brain cells left to put 2 and 2 together.

Geez! Bummer about your car! Congratulations on the new job--I hope you have a lot of fun!