I knew it was coming. I've totally fallen behind in class. But I am still drawing so that's what matters! There are good reasons I've fallen behind anyway, I am pulling together the remaining pages of the joint sketchbook that Brianne Drouhard and I are pulling together for the CTN Expo in a few weeks. It's going to be worth all the panic. I hope.

Speaking of CTN-X, please stop by booth T-81 to see us! Well have our sketchbook, prints, Brianne will be peddling her amazing children's book and we'll be giving away free... smiles. If we've had our coffee. 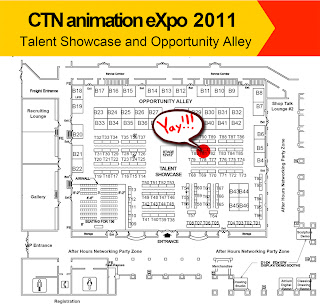 And here are some first explorations for Dorothy and Toto. I have seen a lot of re-imaginings where Dorothy is some post apocalyptic babe and Toto is some kind of mutant, or someone gothed them out and Dorothy's all cutting herself and decked out in black lipstick, or she's a space pirate exploring the planet of Oz... but like, I dunno, what's wrong with her being a little girl? Those are pretty awesome and interesting too! 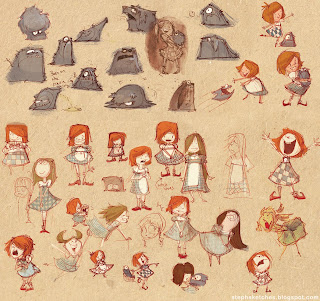 I think I have a better handle on Toto right now honestly, my idea for him is not the charming little purse dog (I accuse Dorothy of being the first to start that awful trend, not Paris ;) ) but rather, he came from a long line of pedigreed cairn terriers and really he belongs dozing in a velvet chair in the Rockefeller estate, but he was adopted out and ended up in Kansas with Dorothy, and, well, he's been hardened by the constant dust storms and general misery of the dust bowl. Matted, caked with dust and twigs, his fur covering all but his judgmental eye - he doesn't care how, he's getting the hell out of Oz, THEN Kansas.

Guess I better figure out Dorothy, huh? I think the movie's about her and stuff. ;)

Thank you guys for looking, please feel free to share thoughts and crits!
Posted by Unknown at 10:24 PM

Hi Steph! Love the Dorothy & Toto sketches... and PORKCHOP too. Looking forward to seeing you at CTNX. amy from SNB

Looking forward to see you ! I'll definitely come by and say 'Hi' :)