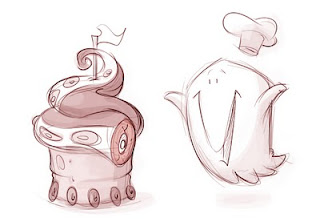 I was nominated for a Kreativ Blogger Award by none other than the lovely Brianne Drouhard, fellow unicorn fanatic, RPG nerdette and all-around unstoppable ball of talent. Thanks girl! 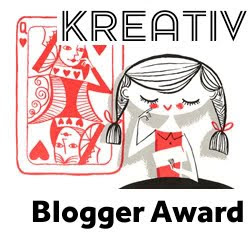 There's a catch to this of course! As part of the rules for the Kreativ Blogger award, I have to nominate the next 7 Kreativ Bloggers, and then list 7 random things about myself... right, like you guys wanna know more junk about me but, rules are rules.

So I nominate, in no particular order:

Bill Presing: You've seen his beauties, but did you know that he also makes a mean avocado pie? If a bunch of people start randomly asking him for the recipe, it will confuse him and that will be awesome. ;)

Sarah Forrester: Her work is adorable, full of life and sincerity. Look no further for some of the most expressive critters you'll find online.

Lauren Faust: This woman is on fire! Her own doll ine just launched and she's the new big cheese for the next My Little Pony line. Talk about livin' the dream!

Eric Favela: I recently met him at CTN and just gawked helplessly at his work. He's works at Blue Sky and his characters just make me melt.

Chris Vear: The only person on earth who is more patient with vectors than I am XD Be sure to check out his canyon piece


Shane Corn: An incredibly productive and inspiring character artist that I look up to!

Daniela Stijleva: Color, character and motion - her artwork has it all. I love her landscapes of the city, she really captures the light and the atmosphere of the Bay Area.

So uh, I guess now the random facts?

1. I'm a girl. I know it sounds redundant but I keep coming across blogs that refer to me as a dude. What's it gonna take, peoples?!

2. I don't mind the sound of nails on a chalkboard, but licking a popsicle stick sends chills down my spine and makes me cringe.

3. I walk all screwed up. It's sort of a lost cause at this point - I originally walked toe-to-heel, which gave me scoliosis and now my left foot sticks out to the side after a bad ankle injury a couple of years ago. That's what I get for not bothering with physical therapy.

4. My favorite things to draw are horses, boobies and fat, round animals/creatures/things. In fact, no matter what it is I am going to draw, I always start by drawing a circle, even if I never build on it. I think of it as like winding up for a pitch.

5. My favorite gaming console is still SNES, after all these years and many consoles later.

6. When I was little I was going to be a whale trainer when I grew up, then an animator, then I realized that I hated actually animating so then I was going to switch my major to biology in college but stuck with illustration. Now I draw animals and continue to love nature shows.

Finally, some culinary spooks. They have a reason for being, I will show you more of that after GDC in March. :) 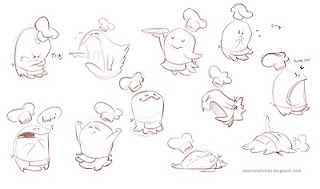 Well congrats and this character is all sorts of awesome! Great job.