Future Fledgie sketches! I don't usually sketch before I felt, but since these are for commissions, I decided to play it safe and make sure the customers and I were all on the same page. I should have the felted forms of these guys good to go over the next few weeks :)

For those tuned into the Pork Chop saga, a brief update: Another surgery and one body cast later, she's doing well and the wound (which previously was massively infected, hence the most recent surgery to cleanse and debride it) is looking great, even 4 days later. Unsure whether I will proceed with the spaying, since her symptoms have subsided and clearly, recovering from surgery is a very difficult thing for Lil' Pork. Just the same, fingers crossed that things continue on this path and that I can have my life back again. 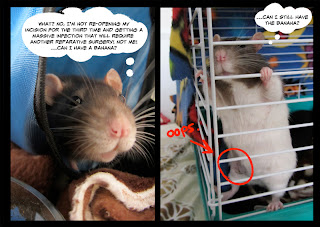 I will be releasing a new rattie print in the near future in an effort to recover some veterinary costs. While making felties for Boo's loss did offset the cost, I found that it was much more time consuming than I had anticipated (I am STILL working on commissions that I took for Boo back in March!), so I think that doing a print run/greeting card run might help get more goodies to more people while making me less crazy. We'll see.
Posted by Unknown at 12:03 PM