I don't really understand why my internal organs seem to act out whenever I have the most things to do in a given week. While I was hoping that this morning's distress was caused by some kind of tainted pie, be it chicken pot pie or avocado pie, it seems that none of the other party-goers are sick today, so I guess it's just another battle lost to micro-organisms. Pass the Gatorade, please.

On a brighter note, I finished that Baby Appa feltie and passed him on last night to his new owner, Bill! Bill took to him immediately and provided a warming pouch for the little guy. Appa, in turn, gave him hints about beating Okamiden on the DS. 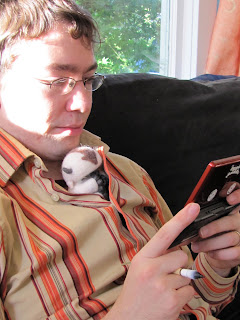 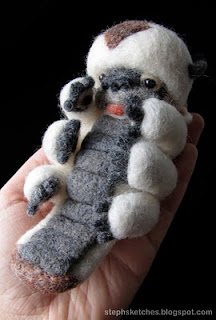 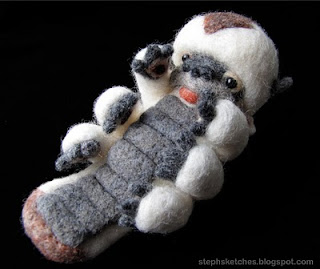 Now, Bill is Ikumi's husband and as you know, she was given the first Appa feltie I made. There have been some strong feelings expressed about the unfairness of there now being a 2 Appa household, (right BILLIAM?! ;) so I will indeed be making another Appa feltie in good time. Actually, two Appas. Vear asked for one too. But next up is a Momo for someone who has been very, very patient, then some goodies for an upcoming show in Chicago this December, and then a Flammie for Brianne. With the exception of Flammie, all of my feltie requests have come from Avatar: The Last Airbender and I gotta say, I am getting tired of making white, grey and brown colored hybrid animals. Either I need to get new friends with more diverse tastes or the A:TLAB crew needs to get a new paint box for the upcoming series ;)

I'll check in again soon, thanks for looking guys!
Posted by Unknown at 12:56 PM

Soooo ridiculously cute. And yes, too many Appas for one house!

Hey! My avocado pie is good for all digestive systems.

Thanks again for baby Appa Steph, he likes his new home and is currently cuddling with his older self.
Which is a little weird I guess... but looks incredibly cute.

OMG!!! this is so awesome!! curious i'm just working with that material too in university, but just for 3 days. learning and enjoying a little bit :D

Craig Mackay said...
This comment has been removed by the author.
3:23 PM

Joe said...
This comment has been removed by the author.
3:06 AM

So, I don't know you. But I just found this and my boyfriend would kill for a feltie Appa. Do you sell them?

OMg! This is too cute! Ive only recently started watching Avatar but he is buy far my favourite character! Kepp up they great work! Yip yip!

How much would you charge for a baby Appa? My mom loooves Appa and Avatar

excuse me.. i am from mexico and i love avatar, my best friend loves appa, do you sell it? i can buy this thing ang i want that you can sell me. i always dream with appa! your work is fantastic! congratulations, if you decide that you could sell me, i can pay you in a place or in another place. please i want a appa!

Ah, I'm so sad you can't sell APPAs- I wish I was your friend!

Haha, but seriously how much would a non fanart animal be?

Unknown said...
This comment has been removed by the author.
10:34 AM

Where can I buy it and for how much