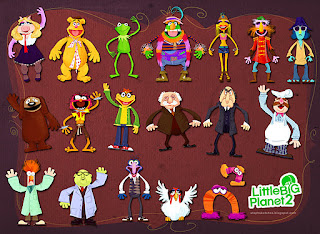 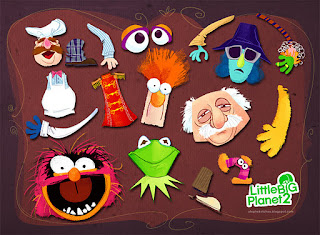 I am thrilled to say that the Muppets Premium Level Kit launched for Little Big Planet 2 and that I can finally show the stickers I made for the kit! If the poses look a little stiff, it is because the characters are composed of 4 different parts (head, arm, body and leg) to allow the player to build them in the game in such a way that allows them to be puppeted. Literally. Normally I would just draw an intact character in motion but this is a little different.

I wanted to make a ton more (Sweetums, Lew Zealand, Crazy Harry, Foo-Foo, Sam the Eagle...), but we ran out of time and budget ;) Seriously, I am a lifelong fan of Jim Henson, so when I was approached to contribute to this set, I was BEYOND GIDDY. I am so happy to see the Muppets getting a second wind now that the new movie has come and gone and I hope that it inspires people to check out the original Muppet Show to see some of the best comedy sketches ever.

Who's your favorite Muppet? I've always been partial to the Swedish Chef and the little Java slinky guys there ;)
Posted by Unknown at 9:48 PM