Remember a couple years ago when I made that poster for The Bad Dudes' album, CHRONOTORIOUS? Well, it kinda happened again, only this time with METROID. 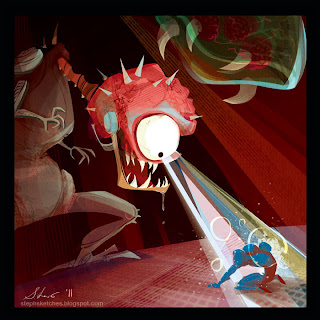 Admit it, hardened gamer, you cried about 10 seconds after this scene took place. ;) I know I did. I think this scene in the game is one of those "OH SHIT NO" moments in gaming that has stuck with me throughout the years. I never thought I could come to care for a life-sucking jelly blob, but here we are.

You can only get the poster with the hard copy of the Bad Dudes new album, which you can snag here. There are also bonus tracks not found in the downloadable version! You can witness an epic unboxing here:

Similar to the CHRONOTORIOUS post, I hope to be following this one up with some Little Big Planet goodies that I made for the Muppets Level Kit, which is supposedly releasing this month. Keep an eye out, thar be googly eyes in this blog's future!

I also found out this week that the Ghost Chef sticker activity book is up on Amazon now for pre-order! The game itself is still in the works and should release for ipad in the spring, but it's mega cool to see the assets I made for the game come to life in physical form. I hope that kids really dig it. 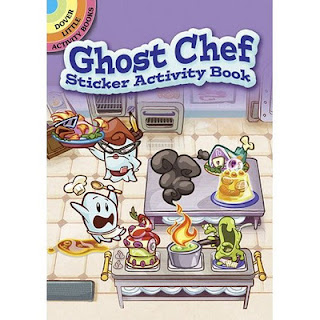 Also, Stuart Ng is now selling Brianne and mine's joint sketchbook! We drew doodles in every single one and signed them, so if you'd like a copy, please pay Stuart's site a visit!

That's about it for now. Planning a big feltie for the end of the month and I hope to document as much as possible about the process, maybe do a little time lapse, assuming my camera is even capable of that. Here's a little hint as to the theme of said feltie. ;)
Posted by Unknown at 11:37 AM